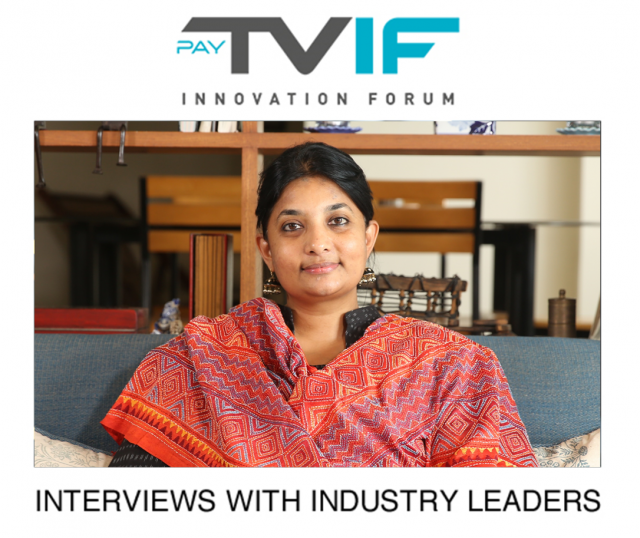 Archana Anand, Chief Business Officer at Zee5 Global, shares her views on the growth of OTT services in Asia, collaboration between OTT service providers and telcos, and the importance of digital transformation.

As part of the programme, we are publishing a series of interviews with leading TV industry executives from around the world to explore their views, perspectives and experiences of innovation. In this interview, Archana Anand, Chief Business Officer at Zee5 Global, shares her views on the growth of OTT services in Asia, collaboration between OTT service providers and telcos, and the importance of digital transformation.

How has Zee Entertainment’s OTT strategy developed over the past few years?

As an organisation, Zee Entertainment was one of the pioneers in launching an over-the-top service into the market back in 2012. The service was branded as dittoTV, but it was way ahead of its time as the ecosystem wasn't yet ready: we didn't have the broadband speed or the payment ecosystem we have today, and bandwidth was still relatively expensive.

However, by the time we launched Zee5 on Valentine’s Day in 2018, we were entering a crowded and commoditised market. There were Indian service providers that had already established themselves and the big global services like Netflix and Amazon Prime were also available. Before the launch, we did some research to figure out the potential reasons why consumers would choose us over our competitors and identified a real need for local content and localisation. That became the core of our proposition and, in many ways, we were the ones in India who pioneered the belief that localisation was the way to go. Since then, there have been studies showing that close to 98% of video content consumed in India is in Hindi or some of the regional languages, and only 2% is in English.

What opportunities exist for OTT services to partner with telcos?

In India, people are comfortable with telcos – they are by far the most powerful distribution channel we have. The relationship between telcos and content providers is massively symbiotic: video services consume a lot of data, creating a major growth opportunity for telcos, while for content providers, payment systems offered by telcos do help in many countries, especially where there is still a certain unwillingness to use credit cards. However, carrier billing is not the only benefit. Whenever we partner with telcos, it is critical that they also invest in a certain amount of marketing support and, wherever possible, actually bundle us into their data plan. At the moment, we’re closing 30+ strong telco partnerships globally.

How has the proliferation of low-cost mobile data plans impacted OTT services in India?

Jio’s cheap data plans have helped to transform the digital ecosystem, especially with regards to video services. However, other factors are contributing to this growth as well: for example, the banknote demonetisation in 2016 has fast-tracked people’s comfort with digital payments – they had no choice but to adopt them.

Nonetheless, what happened with Jio was unique – they’ve demonstrated the art of the possible, and now governments across the globe are fast-tracking their digital infrastructure investments as a top priority. It’s a good time to invest in digital projects as infrastructure is improving broadband speeds are increasing rapidly.

How have you managed the business transformation when launching a new OTT service?

It was very clear early on that to run a digital business we needed a new, digitally savvy workforce, who use digital services daily and can provide their expert opinions about user experience and UI. We also had to change our approach to marketing. Anybody who runs a digital business knows how important performance marketing is, so we also needed to hire performance marketing experts.

We learned it the hard way from our previous attempt to develop an OTT service that the pace of change in digital businesses is much faster than in other media. when we launched Zee5, we moved our team out of our existing office into WeWork offices. We've hired a young, digitally savvy team and adopted a very flat organisation structure – for example, the decision makers sit with the rest of the team and are constantly in touch with what is happening on the ground.