A collaborative approach to taking down pirates 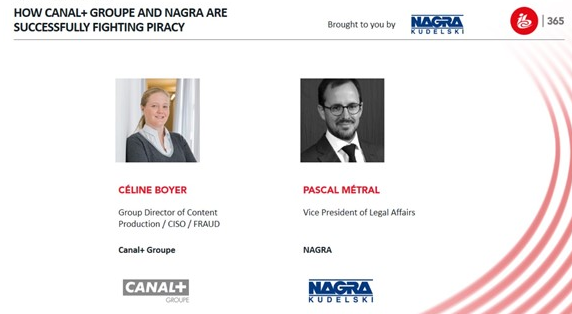 Celine Boyer from CANAL+ Group and Pascal Metral discussed on the importance of collaboration in the fight against piracy in a special webinar hosted by IBC365. Read the blog and watch the video in case you missed it!

By Pascal Métral, VP of Legal Affairs and Head of Anti-Piracy Intelligence, Investigations and Litigation, NAGRA

In 2020 the Pay-TV and streaming industry has felt the disruption of the COVID-19 pandemic, and while consumption of content has increased over the course of the year, it has also resulted in a major surge in online piracy. In the UK, film pirate networks saw a 57% increase in traffic from the last week in February to the last week in March, whilst sites allowing viewers to illegally watch TV shows and series saw a 29% increase across the same period – pinpointing lockdown as the catalyst for illegal consumption.

The advancement of streaming and IP technology over recent years has also led to a rapid advancement of piracy techniques, resulting in a game of cat and mouse – where operators and content providers are investing to keep up with pirate technology, rather than gaining an advantage. Talking with me in a recent webinar with IBC, Céline Boyer, Group Director of Content Protection, CISO / FRAUD, Canal+ Groupe said “There is a big difference between old piracy and piracy today. We couldn’t fight alone, so we needed vendors like NAGRA to help ensure the right tools and technologies are available to fight piracy in a proactive fashion.”

Pirate strategies are constantly evolving, and the move to cloud-based infrastructures, whilst benefitting operators and technology vendors, also offers pirates more areas to ‘attack’ within the distribution chain, making content more vulnerable unless the correct defences are employed. And for high value content such as live sports, technology needs to be focused, agile and alert, so operators can identify and act quickly to take down illegal streams and protect the value of the content.

Piracy is a worldwide issue, and industry collaborations enable the pay-TV industry to present a united front in the face of piracy, such as proving the case against a pirate based on unified intelligence from across the ecosystem. Alliances composed of content owners, broadcasters and technology providers are key in the fight against piracy as their combined resources allows complaints to be filed with the broadest set of information and intelligence possible.

In November, we announced the successful shutdown in Switzerland of illegal on-demand content distributor KBoxServ, in partnership with Canal+. The sting operation with the Swiss police, targeted a Netflix pirate operation focusing on French-speaking content, with over 20,000 active subscribers. Boyer mentioned “When we filed 18 months ago, the KBoxServ has nearly 80,000 TV show episodes available illegally, which is understandably an attractive prospect to consumers. Additionally, the service was disguised as a legitimate service, even advertising itself through legitimate channels.”

Technologies such as watermarking, ensure that identifying the source of leaks is easy and accessible for operators, allowing them to take swift and direct action. With many of the smaller redistributors, they will be served a cease and desist order, while the intelligence is used to build a larger case against organised pirate services which offer the technology infrastructure for illegal redistribution – such as KBoxServ.

Alliances and industry collaborations can also tackle piracy through educating consumers not only on the impact of piracy on the industry and the knock-on impact this has to creating the content they desire, but also by teaching consumers how to identify an illegal service from a legitimate one, and stop them being tricked into investing in a criminal platform.

Through sharing information and expertise, the pay-TV industry as a whole can put up a united front against piracy and make a tangible difference which can benefit every member of the value chain moving forward. Collaboration is and will be key in the battle against pirates.