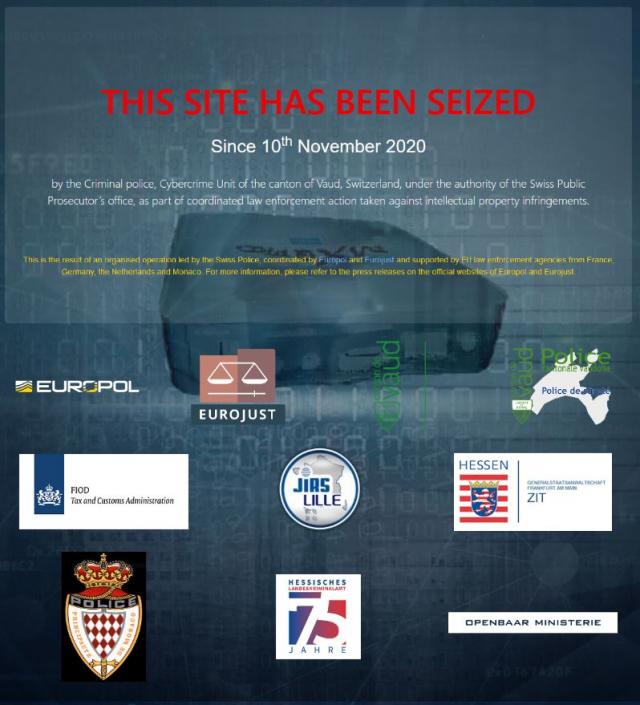 Cheseaux-sur-Lausanne, Switzerland, Phoenix (AZ), USA, and Paris, France – November 11st, 2020 – Canal+ Group, the leading French audiovisual media group, and the Kudelski Group (SIX:KUD.S), the world leader in digital security, today announced the shutdown of a piracy organization based in Canton of Vaud (Lake Geneva region), that delivered French-speaking on-demand content to thousands of customers. It is the first piracy shutdown of its kind in Switzerland.

The operation is the result of a criminal complaint from Canal+ Group and NAGRA, the digital TV division of the Kudelski Group, to the Vaud Police which led the effort with the support of Europol, the law enforcement agency of the European Union, and Eurojust, the European Union Agency for Criminal Justice Cooperation.

The pirate network, called KBoxServ, provided access to a catalogue featuring more than 77,000 TV episodes and 7,000 movies. The service was actively promoted on social networks including Facebook and Instagram, boasting thousands of followers. IPTV devices, pre-configured to give lifetime access to protected content, were sold online and through multiple retail shops across Switzerland and France at a price of approximately 150.- CHF (approx. $160 USD) each. The pirated content was distributed through servers located in various European countries, including Switzerland, France, Germany, and the Netherlands. The pirate organization had full control over these servers, was constantly updating their VOD catalogue of stolen content and even broadcasting advertisements to its subscribers.

“We appreciate the support of the Vaud Police and all organizations that were involved in bringing down this operation,” said Céline Boyer, Head of Content protection, Canal+ Group and Brice Daumin Director of Canal+ Switzerland. “The Kudelski Group has been a valuable partner in the fight against piracy on a global level to help us not only protect content owner rights but ensure we can continue to deliver high-quality content to our subscribers. Together we are sending a clear sign that piracy of protected content is theft.”

“Global content piracy is an increasing problem that defrauds content producers and erodes customer confidence in service providers,” said Pascal Métral, VP Legal Affairs and Head of Anti-Piracy Investigations, Intelligence and Litigation at NAGRA. “While KBoxServ has been claiming to operate in full legality, it is a true pirate broadcasting station that was dismantled today–an organization that has been broadcasting stolen premium content to thousands of users over the last years in exchange for high profits.”

“Today’s shutdown is yet another example of how close collaboration between content producers and owners, governmental entities and anti-piracy companies can bring tangible results in the fight against commercial piracy,” continued Métral. “We thank the cybercrime unit of Vaud Police for leading this operation and for supporting us and our customers in this effort.”

About Canal+ Group
CANAL+ Group is a leading media company and pay-TV operator. It is also a leading player in free-to-air television with three national channels, C8, CSTAR and CNEWS, and an ads sales agency. CANAL+ Group has a wide international footprint with a presence in Europe, Africa and Asia. CANAL+ Group totals 20.4 million subscribers worldwide, including 8.6 million in mainland France. With STUDIOCANAL, CANAL+ Group is also a European leader in the production, acquisition and distribution of feature films and TV series. CANAL+ Group is wholly-owned by worldwide integrated content, media and communication group, Vivendi.

About Kudelski Group
The Kudelski Group (SIX: KUD.S) is a world leader in digital security and a provider of end-to-end convergent media solutions to the digital entertainment industry, including services and applications requiring access control and rights management to secure the revenue in digital television, internet, mobile and interactive applications. The Group also offers cybersecurity solutions and services focused on helping companies assess risks and vulnerabilities and protect their data and systems. It also supplies integrated solutions to manage access control of people and vehicles to sites and events. The Kudelski Group is headquartered in Cheseaux-sur-Lausanne, Switzerland and Phoenix (AZ), USA. For more information, please visit www.nagra.com.

About NAGRA
NAGRA, the digital TV division of the Kudelski Group (SIX:KUD.S), provides security and multiscreen user experience solutions for the monetization of digital media. The company provides content providers and DTV operators worldwide with secure, open and integrated platforms and applications over broadcast, broadband and mobile platforms, enabling compelling and personalized viewing experiences. Please visit dtv.nagra.com for more information and follow us on Twitter at @nagrakudelski.