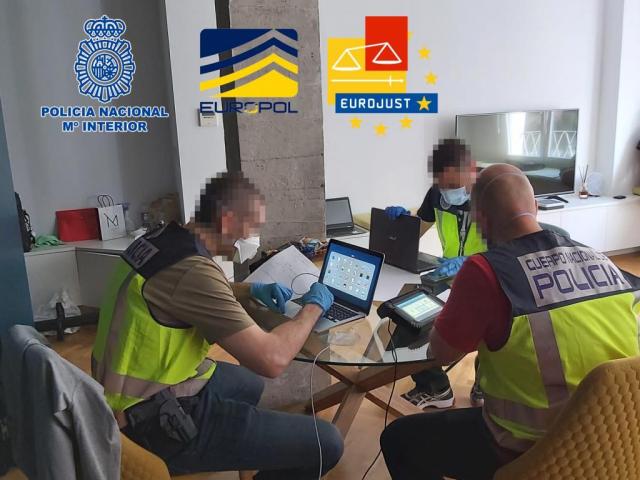 Frankfurt, Germany, Madrid, Spain, Cheseaux, Switzerland, Phoenix (AZ), USA, Herlev, Denmark – June 16th 2020 – The Deutsche Fußball Liga (DFL), the Spanish Football League (LaLiga), NAGRA and Nordic Content Protection today announced the shutdown of an illegal IPTV streaming network based in Spain that served more than two million paying subscribers worldwide. The shutdown is the result of criminal complaints and assistance of DFL, LaLiga, NAGRA and Nordic Content Protection to the Spanish police. The Alliance for Creativity and Entertainment (ACE) was also involved on behalf of the content industry. The coordinated international law enforcement operation was led by the Spanish National Police with the support of Europol, the law enforcement agency of the European Union, and Eurojust, the European Union Agency for Criminal Justice Cooperation.

The pirate network was offering more than 40,000 video channels and video-on-demand content, offering a wide range of channels, sports events, films, documentaries, and series, as well as 50 pirate servers located in various countries in Europe. All were shut down as part of the anti-piracy operation.

The piracy network was based in Spain but operated worldwide – in Belgium, the Czech Republic, Denmark, France, Germany, Italy, Luxembourg, the Netherlands, Romania, Sweden, Switzerland, the United Kingdom, Canada and the United States generating profits in excess of 15 million euros and causing much higher damages to the content industry. Its IPTV service was offered to resellers allowing them to create their own brand and illegal service as a franchise. Arrests were made in several European countries including Spain, Denmark, Germany, Italy, and Sweden. Individuals were charged with crimes against intellectual property, communications fraud, money laundering and criminal organization.

“We are grateful to the Spanish National Police and all involved in this operation for working together to protect and defend content owner rights,” said Melcior Soler, Audiovisual Director at LaLiga. “Piracy is a global problem and it’s critical for the industry as whole to come together to fight it, share knowledge and leverage key partnerships and anti-piracy technologies to preserve high-quality content for our fans – whether it’s in sports or other types of entertainment. Together we can make a difference and alter the piracy landscape.”

“The DFL welcomes this transnational anti-piracy operation that comes at the same time major European championships resume their activities. Tackling large pirate operations at the source is a key component in the fight against large-scale content theft,” said Dr. Holger Blask, Director Audiovisual Rights at DFL. “We are glad the industry is more and more united against piracy, in this case both the sports and the content industries joined efforts to make it happen”.

“We applaud the Spanish National Police for leading this anti-piracy effort to a successful outcome,” said Pascal Métral, VP Legal Affairs and Head of Anti-Piracy Investigations, Intelligence and Litigation at NAGRA. “These results could not have been achieved without close collaboration between all stakeholders – content owners, governmental entities and anti-piracy companies – and is a clear demonstration of how such efforts can have a real impact on stopping the spread of commercial piracy. We are honored to support the effort through our investigations and intelligence teams and to represent the interests of the sports and content industry to ensure their rights are protected.”

“Nordic Content Protection congratulates the Spanish National Police and other national law enforcement agencies throughout Europe that conducted this very successful operation. With assets and money worth six million Euros confiscated from the pirates, it’s a strong signal to other pirate organizations that organized IP crime eventually does not pay off,” said Anders Braf, CEO at Nordic Content Protection.

This latest success further illustrates the importance of a close partnership between content owners, operators, technology providers, policy makers and governments, to make real strides in the battle against piracy and to protect all media and entertainment industry stakeholders’ legitimate business.

DFL Deutsche Fußball Liga is responsible for the organization and marketing of German professional football (Bundesliga and Bundesliga 2 as well as German Supercup).

LaLiga is a global, innovative and socially responsible organization, a leader in the leisure and entertainment sector. It is a private sports association composed of the 20 teams in LaLiga Santander and 22 in LaLiga SmartBank, responsible for the organization of these national professional football competitions. In the 2018/2019 season, LaLiga reached more than 2.7 billion people globally. With headquarters in Madrid (Spain), it is present in 55 countries through 11 offices and 46 delegates. The association carries out its social action through its Foundation and is the world's first professional football league with a league for intellectually challenged footballers: LaLiga Genuine Santander.

NAGRA, the digital TV division of the Kudelski Group (SIX:KUD.S), provides security and multiscreen user experience solutions for the monetization of digital media. The company provides content providers and DTV operators worldwide with secure, open and integrated platforms and applications over broadcast, broadband and mobile platforms, enabling compelling and personalized viewing experiences. Please visit dtv.nagra.com for more information and follow us on Twitter at @nagrakudelski.

Nordic Content Protection is the leading anti-piracy organization working for the Television Industry in the Nordic countries. Nordic Content Protection has supported its members for over 20 years with a range of specialized solutions covering technical advisory, enforcement actions, criminal case investigations, law enforcement collaboration, claims settlements and court hearing testimonials. Our staff consists mainly of experienced high-tech investigators with backgrounds in Nordic Police forces combined with technicians. This and the status as a not-for-profit member association makes Nordic Content Protection an independent high-quality partner and results in a long range of active collaborations with relevant stakeholders such as law enforcement, research- and EU institutions and other partner organizations. Please visit www.ncprotection.com and follow us on LinkedIn