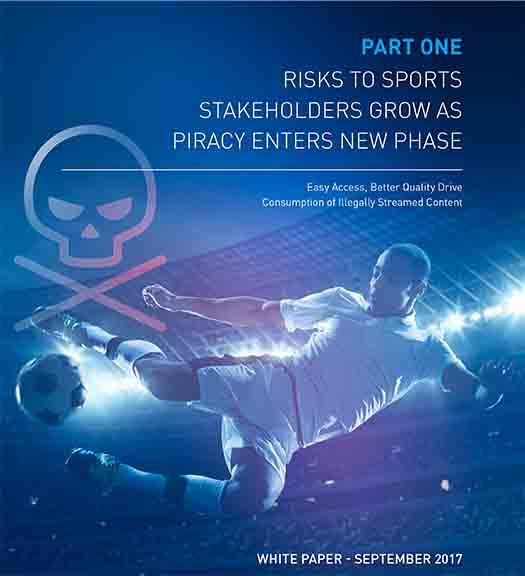 This three-part thought leadership series from NAGRA begins with an in-depth look at the scope and methods of online piracy now confronting live sports rights holders as they leverage Internet streaming to maintain and expand their audiences.

The decline in pay-TV subscriptions in many parts of the world has led to the emergence of massive online audiences for live sports events. While this is creating new revenue streams and direct customer relationships for sports rights holders, traditional broadcast and new OTT revenues are increasingly threatened by surging consumer reliance on illegal sources of streamed content.

Momentum behind the siphoning of ad dollars and paying viewers from legitimate sports and other live TV programming has been building worldwide with the emergence of a vast “IPTV” or Kodi add-on piracy ecosystem that greatly simplifies consumer access to illicitly streamed content while enabling an unprecedented quality of user experience. The impact is especially severe in North America, Europe, Asia and other regions where broadband access speeds can support delivery of 1080p HD and 4K UHD content to wide-screen displays on par with what consumers can get through legal pay TV service providers.

Making matters worse, efforts to thwart illegal streaming of live sports programming pose a much bigger challenge than has been the case with films and series. While the pursuit of legal action and other measures against pirate sites is an essential component of anti-piracy strategies regardless of whether content is delivered live or on demand, the best way to discourage consumer reliance on illegal sources for viewing sports online is to create market-wide awareness that there’s a risk of missing out on seeing major events by routinely disrupting transmissions when millions of people are tuned in.

With billions of dollars at stake, NAGRA, a Kudelski Group company, has responded to this challenge with technology innovations and services that are essential to blocking live streaming of pirated sports content as it occurs. At the same time, the company has strengthened its position as the industry leader in tracking and acting against piracy worldwide with a major expansion of personnel and other resources devoted to these activities.

Parts 2 and 3 of our series will provide a detailed look at these tools and services and how stakeholders are using them to good effect. But, first, we offer an up-to-date analysis of the state of online piracy and the trends in viewing behavior that underscore the need for concerted action.