If you wish to know more about the solutions and services we offer to help service providers deliver to their consumers a compelling, frictionless access to all content on all screens, please contact us at dtv@nagra.com.In a previous blog, we established an updated taxonomy for virtual reality (VR). With that, we can map its progress more effectively.

Most significantly, we identified the end-goal for VR in entertainment – programmatic storytelling – where the story reacts to actions triggered by the viewer (who themselves become part of the story). Unfortunately, this entails both significant advances in tech, and more importantly, filmmakers completely changing the way they frame stories and scenes. It’s unlikely this will become mainstream for long-form content any time soon. 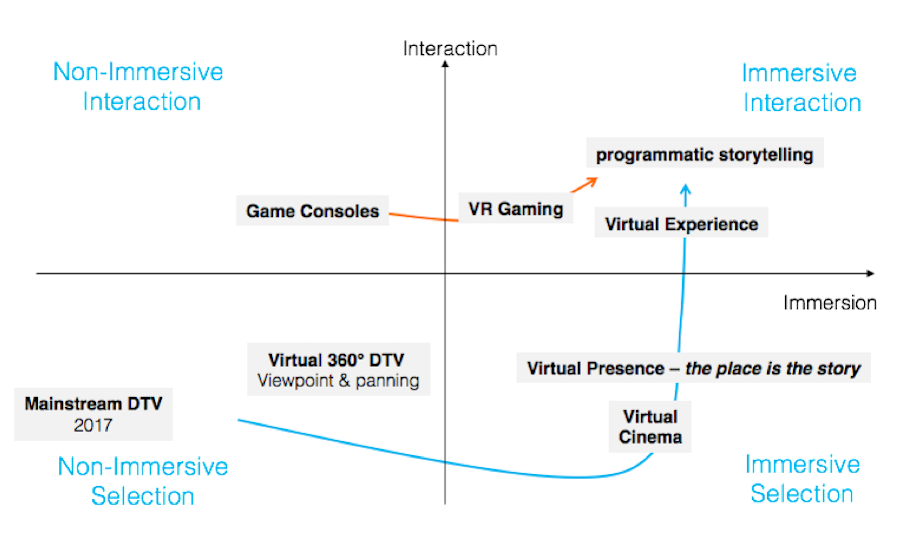 So this begs the question: what can the media industry use until we reach that Nirvana? Here are five possible options until then.

Perhaps the most accessible approach for now is using existing content and making it available in a VR setting – not making the content itself VR, but rather the basic user experience.

The idea is simple. You use a VR headset with a playout device (a games console or even a smartphone) with a virtual cinema app to watch existing content. With no content to repurpose, you could describe this as a low-hanging fruit for the industry.

But with that said, screen resolution – especially when it comes to portable devices – will have to improve significantly for this application to be viable beyond short-form content.

This describes a TV experience where the consumer is not just selecting camera angles but actually panning a 360° scene.

With the current proliferation of 360° camera rigs, ranging from DIY setups leveraging GoPro cameras to high-profile rigs like Samsung’s Project Beyond, Immersive Media or Nokia’s OZO, shooting 360° scenes is getting closer to mainstream. Actually streaming that 360° content (likely a unicast flow) and consistently playing it on a number of devices, however, still presents a challenge at this point.

An important point to consider is that although the content is shot in 360° mode and therefore consumable on a VR headset in an inherently immersive way, one can actually view this also non-immersively – i.e. through panning the image on a regular TV set. This isn’t quite VR, but it is an industry stepping stone for sure that should be explored.

This is where you’re virtually present at a location or event without the need for a storyline. The place itself, and what’s happening within it, becomes the story.

The possibilities are huge, and in many cases don’t require a sophisticated rethinking of the content creation ecosystem. In essence, it leverages the same content capturing and reproduction environment as virtual 360° TV. In some instances, the content could even be as simple as a static 360° image and still yield very satisfying, immersive results.

The obvious use case is of course virtual presence at live events like concerts, sports or even high profile industry trade shows. Interesting projects are starting to emerge and it will for sure be one of the major application areas of VR. One notable – and successful – example is Night Fall, a Swan Lake-inspired production by the Dutch National ballet.

The vast majority of these productions are currently still produced in a pure 360° way and don't yet leverage volumetric representation of the 3D assets. The latter is an important evolution that will greatly add to the feeling of immersion going forward. But again, we're talking stepping stones here!

Virtual experience takes immersion and interaction dimensions one step further than virtual presence by allowing the user to interact with content objects. It also gives more sensory feedback from doing so. Typically, this type of immersion will require significantly more haptic feedback beyond the visual and aural input that are often sufficient to credibly suggest virtual presence.

Nice examples are so-called ‘adrenaline sports’. Imagine engaging in a downhill ski experience at speeds way beyond your own technical skills (and live to tell the tale!). And of course, if there is a use case in media and entertainment, it typically has potential in the adult entertainment realm, too.

This involves telling a story without forcing the viewer to consume it a strictly director-designed structure – there need to be spaces where the viewers can explore for themselves, but still be cued back to the broader intended narrative.

This could be achieved with the use of sound cues, although this may not always be a viable option – especially in action-packed scenes where other sounds will be drowned out. Clearly this is an area that still requires experimentation. Nonetheless, this chasm has to be crossed at one point. Another approach is to draw the viewer into actively engaging with the experience through some form of game-i-fication. This is also the approach that was taken with the Wonder Buffalo production that was featured at the NAGRA booth during IBC 2017. Wonder Buffalo also nicely illustrates how short-form VR companion experiences complementing longer form entertainment productions present a promising vehicle to explore VR-guided storytelling. The short form approach also offers the additional benefit to elegantly contain the kinetosis effect often experienced during longer exposure to VR settings.

While VR (and even more so AR) is a huge emerging field with far-reaching opportunities, we risk unreasonably inflating expectations by being overly focused on the most advanced use cases – those that will be met with technical issues and with the most consumer trepidation.

Until we reach that end-goal the gaming industry can lead the way, allowing us to modestly experiment with the emerging field of programmatic storytelling while exploring lower-hanging fruit for the industry. To keep things in perspective, perhaps this diagram offers a helpful timeline. 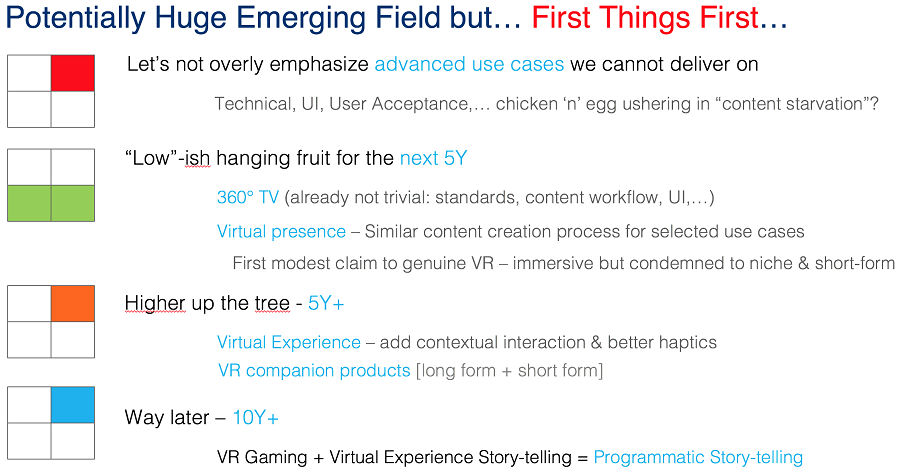 If you wish to know more about the solutions and services we offer to help service providers deliver to their consumers a compelling, frictionless access to all content on all screens, please contact us at dtv@nagra.com.